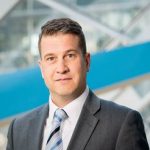 In 2017 Pfandbrief volume outstanding has not diminished for the ﬁrst time in in more than 17 years and now totals Eur 362 billion. Indeed, new issues outnumbered maturing bonds only slightly to the order of Eur 3.3 billion.
In the ﬁrst quarter of 2018 benchmark Pfandbriefe totalling Eur 9 billion (19% market share) were the morst important among Eur-denominated covered bonds.

In 2017, the volume of Pfandbriefe in circulation did not decline for the ﬁrst time in more than 17 years and now stands at EUR 362 billion. Deutsche Bundesbank’s capital market statistics show that new issues in fact exceeded maturing bonds by a comparatively small EUR 3.3 billion. Nor should the percentage increase of 0.9% be seen as a reason for excessive euphoria. After all, the number was preceded by declines of 6.6% (in 2016) and 44% (in 2015). In the years 2000 to 2017, the volume of Pfandbriefe in circulation fell EUR 1,106 billion to the above-mentioned EUR 362 billion. However, we would nevertheless highlight the symbolic strength of the growth, which indicates that the volume outstanding is steadying. All the same, the momentum in Mortgage Pfandbriefe, which also include Ship and Aircraft Pfandbriefe in Deutsche Bundesbank’s statistics, does stand out. The volume of Mortgage Pfandbriefe outstanding grew by EUR 10.3 billion to EUR 214 billion in 2017. This contrasted with a decrease of EUR 7.0 billion in Public Pfandbriefe to EUR 148 billion. This marked a continuation of the trend in Public Pfandbriefe, which has also been largely responsible for the decrease in the amount of Pfandbriefe outstanding in Germany observable in recent years. Since 2000, the total outstanding volume of Public Pfandbriefe has shrunk from EUR 859 billion to the above-mentioned EUR 148 billion – in the period 2012 to 2017 alone the volume declined by more than one half. These diverging trends also become evident if one considers the relative distribution of Pfandbrief volume. For example, the share of Mortgage Pfandbriefe according to the Bundesbank statistics exceeded the share of Public Pfandbriefe for the ﬁrst time in June 2015 and has attracted nearly 60% of outstanding volume up to the current margin. We expect the trends in Public and Mortgage Pfandbriefe to continue to diverge in 2018. At the same time, Mortgage Pfandbrief issuance activity is likely to determine the direction of aggregate outstanding volumes. A distinction between Registered and Bearer Pfandbriefe shows that the share of registered bond volume in 2017 generally remained at the level of previous years (45.0% in 2017 vs 45.5% in 2016).

In 2017, EUR 15.8 billion of euro-denominated Pfandbriefe were issued in benchmark format (at least EUR 500 million); in the years 2011 to 2017, the amount ranged between EUR 14.3 billion (2012) and EUR 24 billion (2015) lag. This made Pfandbriefe the most signiﬁcant product in the euro-denominated covered bond segment in the years 2014 to 2016; in the remaining years, they ranked second. In that period, the market share of Pfandbriefe in all euro-denominated benchmark issues was between 14.7% (2017) and 17.4% (2016). In the ﬁrst quarter of 2018, EUR 9.0 billion of Pfandbriefe in benchmark format were issued, which gave them a market share of 18.6% and made them the most signiﬁcant product in the euro–denominated covered bond segment. The Pfandbrief market is largely shaped by German investors. The allocation to domestic investors in the primary market has averaged 76% since 2011. In no other country do domestic investors play a comparably important role. The share of domestic investors in every other country is well below 50%. Further important investors in German Pfandbriefe come from Asia (4.7%) and the Nordic region (4.5%).

DZHyp would become the largest Mortgage and Public Pfandbrief issuer

Among the top 3 of the Pfandbrief issuers by outstanding Hypothekenpfandbrief volume, Münchener Hypothekenbank (11.4%) continues to occupy the top spot, followed by WL Bank (8.6%) and UniCredit Bank (8.3%). The top 10 institutions have a combined market share of 69.6%. In the Public Pfandbrief segment, NORD/LB has been the largest issuer with a share of 11.5% since the Q3 2017 following the acquisition of Bremer Landesbank. Positions two and three were reversed; BayernLB (11.4%) now ranks ahead of Helaba (11.2%). Overall, the concentration remains far greater than for Mortgage Pfandbriefe. The ten largest issuers of Public Pfandbriefe together account for 82.0% of volume outstanding. As of today, this year’s planned merger between WL Bank and DGHyp to form DZHyp would create the largest issuer in both of the above Pfandbrief market segments. The new entity would currently have 13.4% and 11.6% shares in the Mortgage and Public Pfandbrief markets respectively.

In 2017, the Pfandbrief market did not shrink for the first time in more than 17 years and grew across all types of Pfandbrief by EUR 3.3 billion to EUR 362.2 billion. Although Public Pfandbrief volume continues to decline and the adjustment process in the segment does not appear to have ended completely, we believe that a further decrease in outstanding Pfandbrief volume will become increasingly unlikely simply due to the adjusted volume effect. In particular, the growth in Mortgage Pfandbrief volumes in recent years – which is now the most significant type of Pfandbrief with a volume outstanding of EUR 214.0 billion – now supports the thesis that the adjustment process in the Pfandbrief market is virtually over and that volumes can be expected to grow again in the medium term. Since the ECB launched its purchase programme, spreads in the covered bond market have adjusted considerably and are now at a level that would not have been reached in our view if supply had not been artificially cut by the Eurosystem.

Pfandbriefe have of course also profited from this scarcity, which has led to lower funding costs for issuers as well as lower interest rates for borrowers. Now that the ECB has begun to exit from QE and net purchases are expected to end this year, we believe that the period of permanently lower spreads should be over in the foreseeable future. In the first three months of this year, investors appear to have started to price the ECB’s exit into the spreads in the covered bond market. As a result, spreads are slightly wider than at the start of the year. We assume that this process has only just begun and will probably continue for quite some time. Nonetheless, Pfandbriefe showed the lowest volatility in previous widening moves in the covered bond market and thus offered investors a certain degree of protection in the widening move. We are convinced that they will do so this time as well and we therefore view Pfandbriefe as a basis investment in the covered bond market.