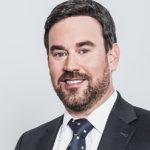 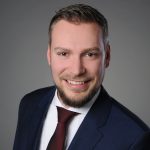 On 6 July, the Upper House of the German Parliament (Bundesrat) gave the green light for an amendment to the German Banking Act (KWG) by waiving its right of veto under the “Act on the Exercise of Options under the EU Prospectus Regulation and the Adaptation of Other Financial Market Laws”. Section 46f KWG and hence the regulations governing the liability cascade for banks are now in line with European law. As a result, since 21 July 2018, German banks have been able to issue senior preferred ‘vanilla’ bonds as well as senior non-preferred (senior bail-in) bonds.

In this document, we will examine the two types of securities, focusing on selected features, and consider whether German senior preferred bonds can be regarded as a rival product to German Pfandbriefe. 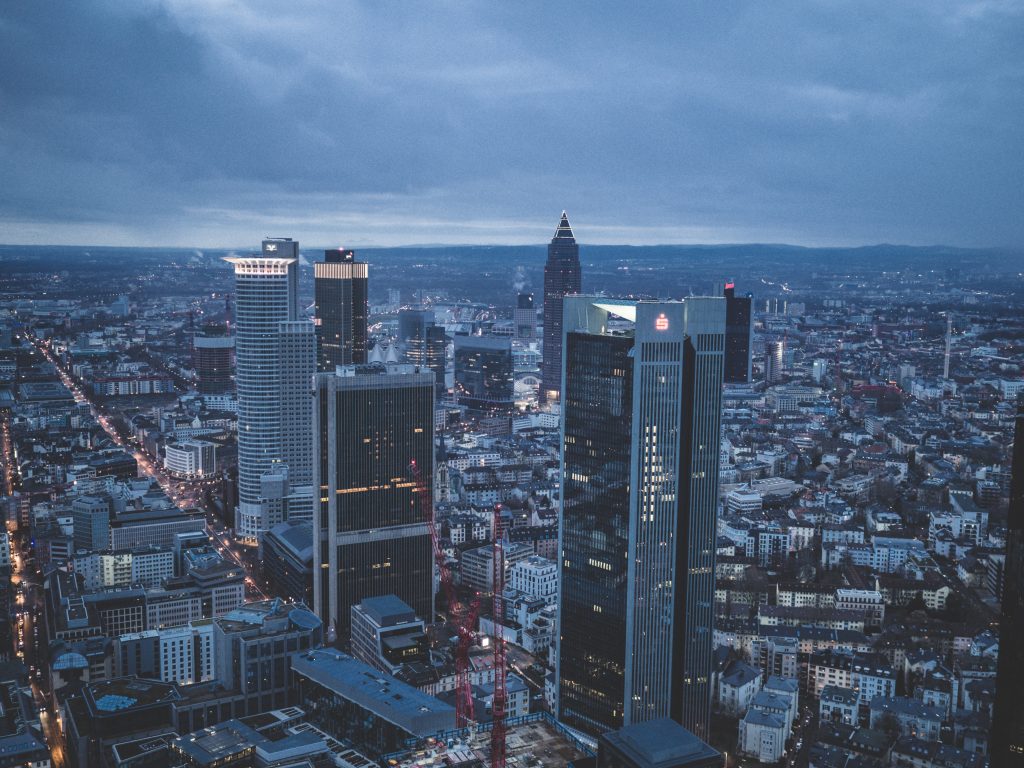 Senior preferred bonds are designed to provide German banks with a cheaper funding option compared to the existing unsecured bonds. Unlike the unsecured bonds issued up to now, the new segment cannot be used to meet regulatory minimum requirements such as MREL (Minimum Requirement for own Funds and Eligible Liabilities) or TLAC (Total Loss Absorbing Capacity).

After the insolvency sequence for banks in Germany was modiﬁed, as mentioned above, all currently outstanding senior bonds of German banks were subordinated to the new senior preferred bonds.

This means that old holdings of outstanding senior bonds of German banks were placed on an equal footing with future senior non-preferred issues from a regulatory perspective. As a result, there is minimal backlog demand for the issuance of senior non-preferred bonds among the major German institutions to meet regulatory minimum requirements. 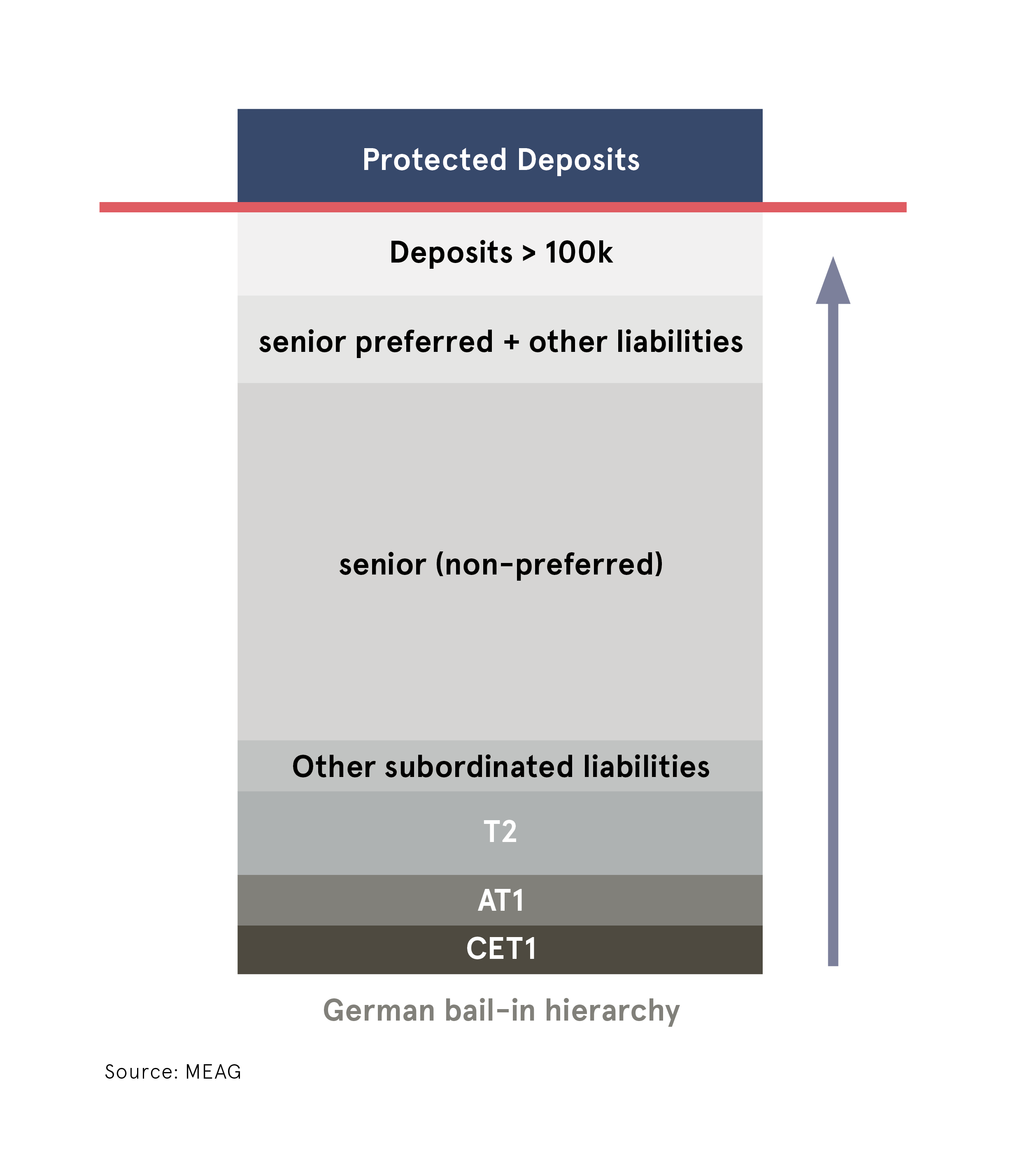 The Pfandbrief is one of the largest segments of the European bond market. It has frequently shown itself to be a reliable funding instrument for banks and a safe investment, especially in times of crisis. Pfandbriefe give investors a degree of security comparable to that offered by only a small number of especially highly rated sovereign issuers. Their high creditworthiness is also reﬂected in the top-class ratings assigned by rating agencies.

Unlike senior preferred bonds, the regulator exempts Pfandbriefe from bail-in mechanisms. In addition, Pfandbrief investors are protected by the provisions of the German Pfandbrief Act (Pfandbriefgesetz), which has been steadily improved over the years. Furthermore, Pfandbriefe are subject to special public supervision by the Federal Financial Supervisory Authority (BaFin).

Depending on the structure and volume of the issuer’s outstanding bonds and capital cover, the rating agencies give senior preferred bonds a rating that is in some cases considerably better than that of senior non-preferred bonds. In the case of Commerzbank, which was the ﬁrst issuer to issue a German senior preferred bond in benchmark format, the rating is three notches higher at Moody’s, two notches at S&P and one notch at Fitch. This is due in particular to the bail-in buffer mentioned above, given the volume of outstanding old senior bonds. Commerzbank’s Pfandbriefe are only rated by Moody’s, which assigns the highest score of triple-A.

It is a similar picture for the other two outstanding senior preferred bonds issued by Deutsche Bank and Berliner Hypothekenbank. 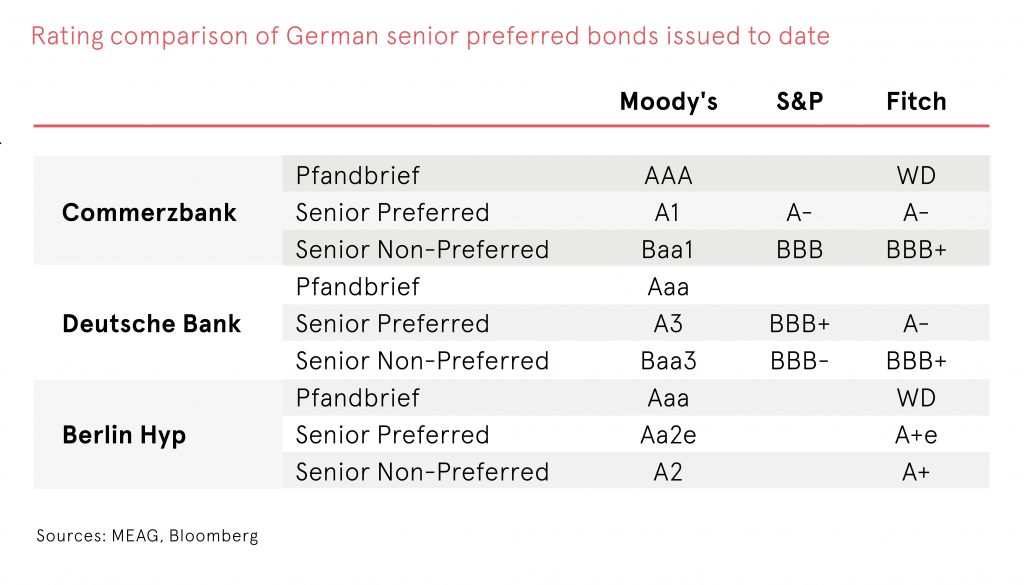 This high proportion of triple-A rated Pfandbriefe underlines the high quality standards that distinguish this product and are appreciated by investors. 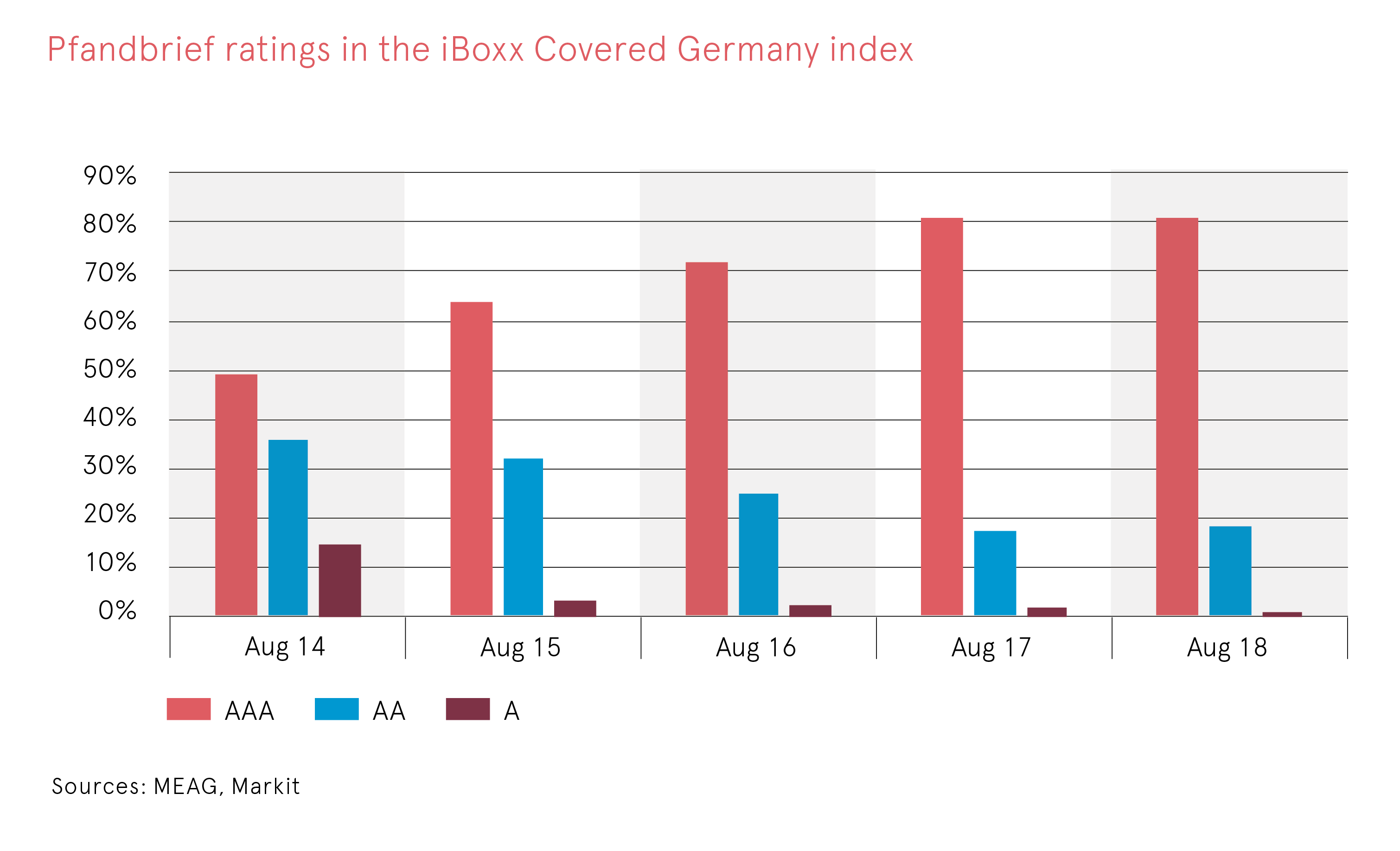 In the future, though, it will be important to keep an eye on how far issuing activity changes the ratio of outstanding volumes of senior (non-preferred) to senior preferred bonds. If the senior (non-preferred) segment shrinks by comparison due to relatively smaller issuance volumes, the quality of senior preferred bonds could suffer due to a smaller buffer in the event of bail-in. This would increase the likelihood of investors being asked to pay up in a bail-in scenario. 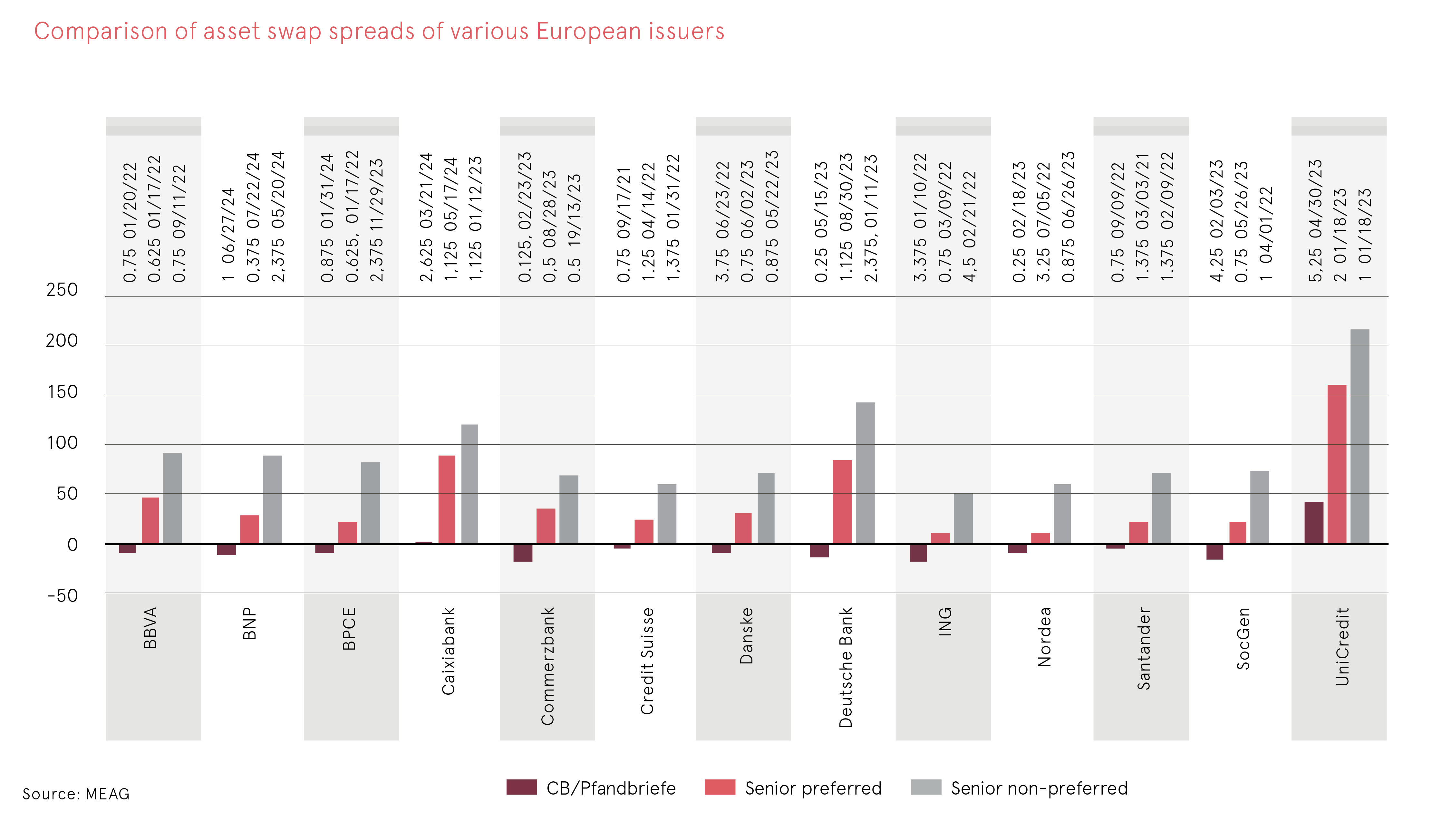 The high proportion of top-rated Pfandbriefe mentioned earlier is also reflected in the trend of asset swap spreads of German Pfandbriefe The following chart shows that, while even Pfandbriefe were not entirely immune to the major crises of the past ten to ﬁfteen years, their spreads have widened by much less than the covered bond index as a whole. Asset swap spreads have even reverted to tighter bandwidths than those seen before the ﬁnancial crisis. However, this movement is also attributable in large part to the purchases made by the European Central Bank under its third asset purchase programme.

Looking at Jumbo Pfandbrief spreads, it is noticeable that, with one exception, all issuers are trading in a narrow band of around ten basis points in the 1-5 year segment. In the 5-10 year segment, the range increases slightly, but still lies within a narrow band. 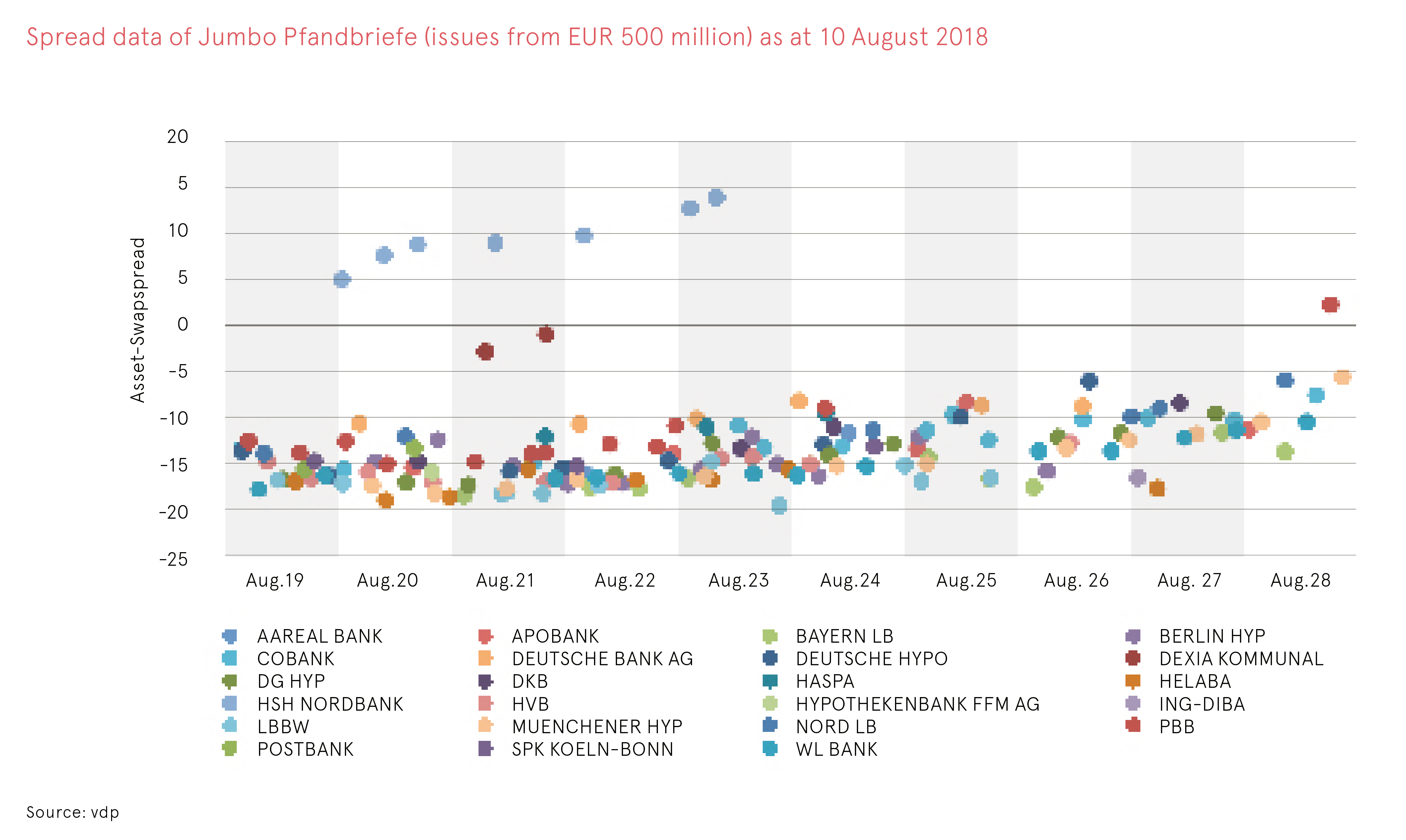 As senior preferred bonds are not used to meet minimum regulatory requirements, the share of these bonds in banks’ total outstanding issuance volume will tend to be somewhat lower. Furthermore, this new segment tends to be aimed at “steady hands”: real money investors such as insurance companies, bank treasuries and retail customers are not generally characterised by a high turnover rate. This suggests lower liquidity and lower price volatility. Observations from other countries such as France, where senior non-preferred bonds have already been introduced, support this argument.

In September 2014, the European Central Bank (ECB) announced a third covered bond purchase programme (CBPP3). Since October 2014, it has been buying covered bank bonds week after week on the primary and second-ary markets. As of 13 August, covered bond holdings in the ECB’s CBPP3 portfolio amounted to EUR 256.66 billion. This is in addition to holdings under the two completed purchase programmes CBPP1 (EUR 4.49 billion) and CBPP2 (EUR 4.04 billion). The total ﬁgure of EUR 265.19 billion in the ECB’s CBPP portfolio corresponds to around 40% of the CBPP-eligible covered bonds in the iBoxx covered index and around 31 % of the total iBoxx covered index.

These ﬁgures clearly show that the volume of covered bonds, and thus also Pfandbriefe, available to private investors on the secondary market within the euro zone has declined sharply. Also bearing in mind the ECB’s announcement that it will hold its bond positions accumulated under the CBPPs until maturity and reinvest maturities, it is clear that liquidity in the market for covered bonds and thus also for German Pfandbriefe has dete-riorated signiﬁcantly, though it is still fairly good compared to many other asset classes.

Moreover, the slightly higher yield of German senior preferred bonds compared to Pfandbriefe is not a good enough reason for us to switch to an unsecured investment. If we invest in unsecured bank bonds, these should preferably be bonds that stand below senior preferred bonds in the liability cascade in order to achieve more attractive returns. However, any such investment must be justiﬁed by the result of our extensive internal investment and analysis processes. This means that, if we want to invest in safe bonds, we should also buy products that are genuinely safe, such as German Pfandbriefe. If we decide to invest in unsecured bonds, we currently tend to invest lower down the capital structure of banks in order to achieve a higher yield premium, provided we assess the issuer risk as adequate.

We regard German senior preferred bonds as another investment option, but not as a rival product to existing asset classes. Not least for this reason, we expect a fairly modest supply of senior preferred issues, at least in Germany. For banks, while these bonds are another funding instrument, they do not provide any further regulatory added value. In terms of volume, benchmark Pfandbriefe worth just under EUR 20 billion had already been issued by the end of July 2018 – more than in the whole of 2017. This means that demand for Pfandbriefe remains very high, despite low yields and tight spreads. Good quality remains sought after.