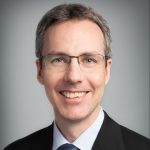 It has been four years since the ECB launched its asset purchases with the CBPP3. Now net purchases are gradually coming to an end: From January 2019 onwards only the redemptions should be reinvested. Will the central bank’s buying strategy in the covered bond market change against this backdrop?

CBPP3 no longer offers a significant advantage on the primary market

The ECB’s ability to influence the volumes it collects on the primary market is limited. Neither the market supply nor its final allocation by the issuers can be directly determined by the central bank. The adjusting screw in this equation is the order the ECB places in new issues. After this ratio had already been reduced twice in the spring of this year, the central banks recently took the next step: Starting with the new issues settling in October, the CBPP3 order was apparently reduced from previously around 30% to only 10% of the anticipated deal size. This was a larger cut than most market participants had expected and, in principle, would argue for ongoing pressure on new issue premiums. After all, for a typical €500m deal, €100m of additional demand may now have to be generated via other channels. French MMB SCF has shown that this can be a significant hurdle when the bank had to postpone its debut deal due to a lack of demand.

In the CBPP3-eligible benchmarks, which were successfully issued in the first weeks after the reduction of the ECB order ratio, the overall share placed with central banks and official institutions averaged 16%. Previously, this share was 1.7 times higher, at the beginning of the year even 2.6 times higher. By contrast, central banks and similar institutions received an average of around 20% of all non-CBPP3-eligible benchmarks this year. Hence, we can actually no longer state that CBPP3 demand still offers eurozone issuers a clear advantage in the primary market. Ultimately, central bank participation in new € issues has returned to a level that was by no means unusual even before the CBPP3. The remaining difference is that order books with a three-digit number of participating investors were still commonplace at the time, while today this is the exception. However, a “normal spread correction” will hardly be enough to win back these lost investors on a broader front. This is likely to require a fundamental adjustment of yield levels, which cannot come solely from the covered bond market but will likely require a normalisation of general monetary policy. 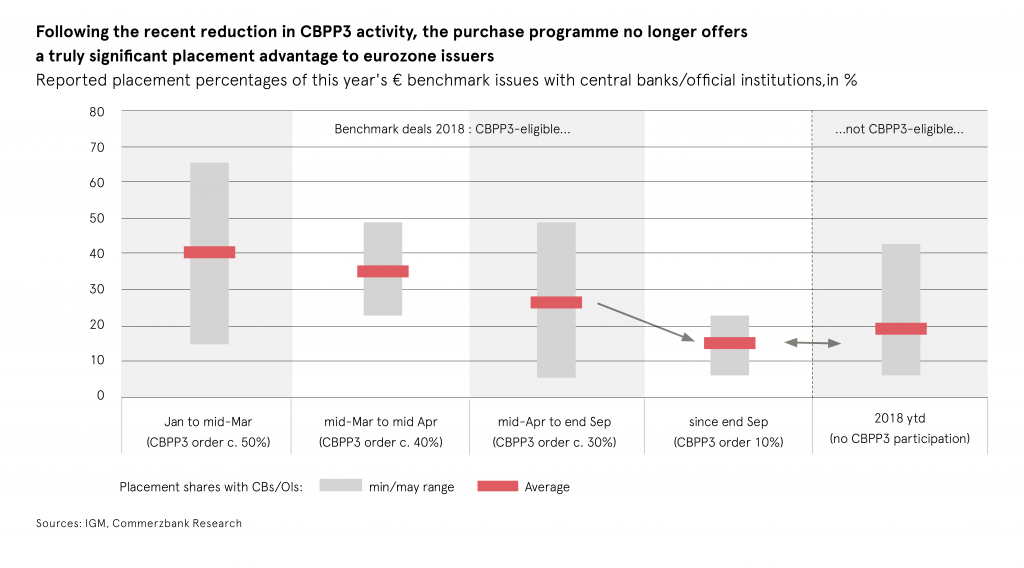 Nevertheless, we do not expect a pronounced spread slide in the short term, for various reasons:

All this should keep the general spread risks in check. We therefore continue to expect only moderate spread pressure on core names. 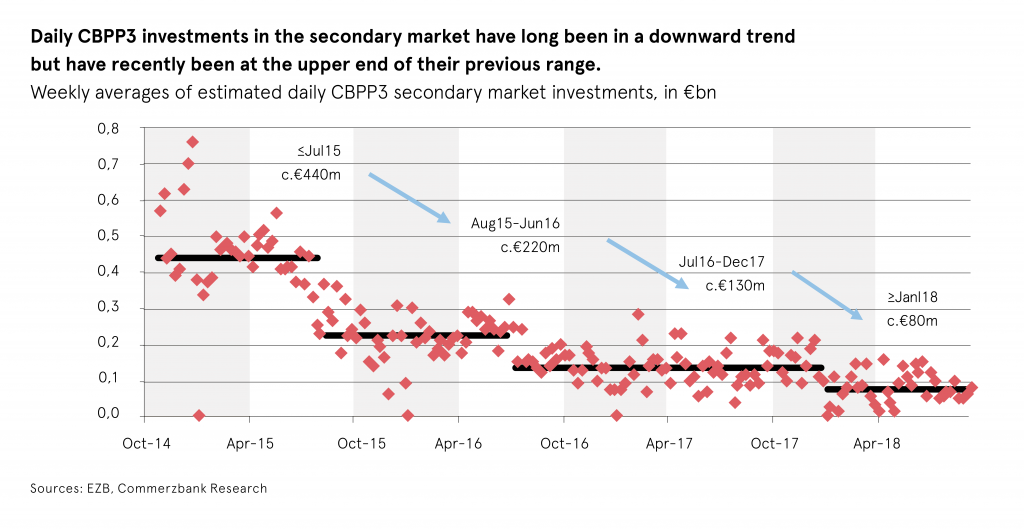 The market expects that from 2019 onwards, no more net purchases will be made under the APP programmes and that buying activities will instead be limited to the reinvestment of redemptions. So the question is, first, how high these redemptions will be in the CBPP3; secondly, whether they will be replaced 1:1 by new covered bond purchases; and thirdly, whether this could herald a change in the central bank’s purchasing strategy.

Since the ECB started to publish the upcoming maturities under its individual programmes for the next 12 months, we have a better impression of the future reinvestment pressure it should face. In 2019, the CBPP3 is likely to be relatively quiet on this front. From January to September 2019, CBPP3 redemptions of €17.9bn will officially be due. This is 24% above the previous year’s figure. If we extrapolate this increase to the year as a whole, this points to CBPP3 maturities for 2019 totalling around €23bn.

Let us assume for now that the ECB would fully reinvest these CBPP3 redemptions 1:1 in new covered bonds. The above estimate of 2019 maturities would then correspond to a monthly average purchase volume of around €1.9bn. That would be only about half of the previous purchases.

Furthermore, the purchasing requirement of the central bank in 2019 will no longer follow a more or less stable monthly base target but will only fluctuate depending on its maturities. This will ease the burden on the ECB as well. This is because maturities on the covered bond market naturally roughly follow the usual seasonal supply pattern (many January issues mean many January maturities in later years and vice versa). The central bank will therefore more often find itself with the need to buy precisely when the primary market is producing larger volumes in any case. This should make it easier for the central bank to cover its investment needs without having to tap more into the secondary market. 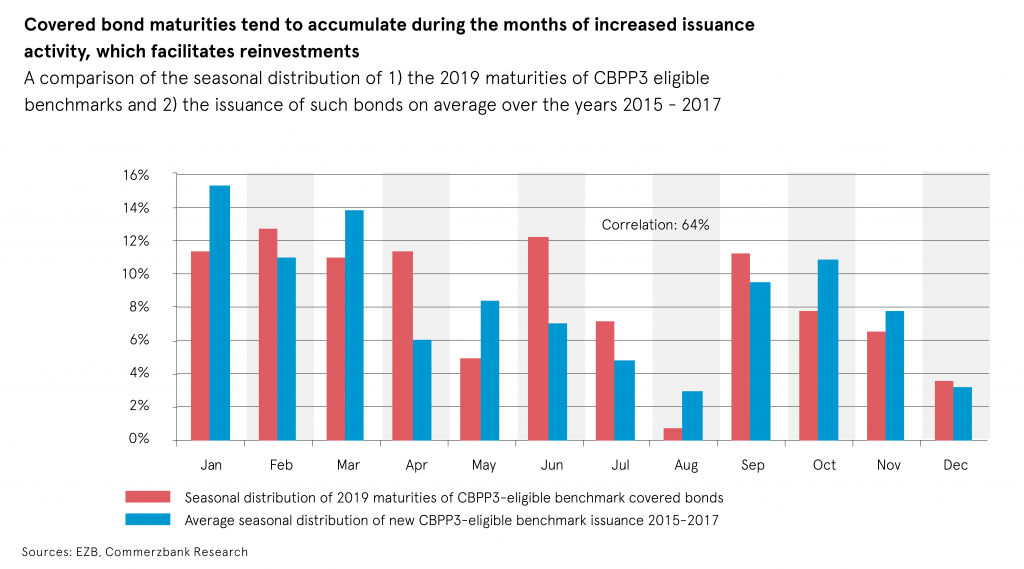 All of this could be seen as possible reasons why the ECB’s support for the covered bond market could fall further. Against this backdrop, it comes as no surprise that many banks preferred to tap the primary market relatively early and extensively this year.

Nevertheless, we believe that the ECB will remain a substantial investor, which will continue to support both the primary and the secondary market noticeably. There are several reasons for this:

With an order ratio for new issues of only 10%, the potential for further reductions is naturally very limited. As already mentioned, we therefore believe that this quota will remain with us for the time being.

The relatively low increase in expected CBPP3 maturities in 2019 is probably mainly due to the fact that only few deals will expire in the coming year, in which the purchase programme was already involved when they were placed. However, this will change in 2020, when all the 5-year deals issued during of the first full CBPP3 year, 2015, are due for redemption. This could significantly increase the CBPP3 maturities. The ECB’s reinvestment challenges may therefore be moderate in 2019, but they should increase noticeably thereafter. The central bank should anticipate this – and could possibly respond with some front-loaded purchases.

Furthermore, it is not yet clear how flexibly the ECB will divide its reinvestment needs between the individual product classes of the APP. Instead of strictly replacing all maturities 1:1 in the same purchase programme, a more variable approach could offer many advantages. The PSPP, for example, continues to be close to its legal limits. Furthermore, the ECB has explicitly stated its preference for purchases in the private sector, to which it attributes a more direct economic stimulus than to the purchase of government bonds. At the same time, however, corporate bonds no longer seem to be in vogue with the central bank to the same extent after individual issuers proved vulnerable to credit pressure. Accorting to media reports, some policymakers are even advocating not rolling CSPP redemptions entirely. This could be reason enough to remain open to additional net buying of covered bonds for the time being, if the market were to allow it without further distortions.

Overall, we therefore believe it is likely that the ECB will dry its powder for the time being and that its purchasing strategy on the covered bond market will not become too defensive in order to secure the greatest possible flexibility on such issues.