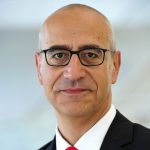 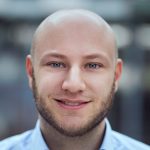 The covered bond market in the first nine month of 2018 was in a very strong and healthy shape. It was characterized by high supply volumes and relatively stable spread levels. The German Pfandbrief market has played a key role in this development, proving to be the most active covered bond market in terms of number of banks issuing, number of transactions and volume of supply.

With EUR 115bn of new issues in the euro benchmark format in the first three quarters, supply had exceeded the expectations of many market participants. This was the highest 9M supply since 2011, when new issuance was above EUR 176bn in the first three quarters. However, the high supply volumes in 2018 benefitted from a very strong first quarter with the subsequent quarters losing some momentum, but remaining higher than in the previous year. Third quarter issuance decreased to EUR 28bn, compared to EUR 39.5bn in Q2 and EUR 47.7bn in Q1. The key characteristics of euro-denominated benchmark covered bonds issued in 9M18 are: 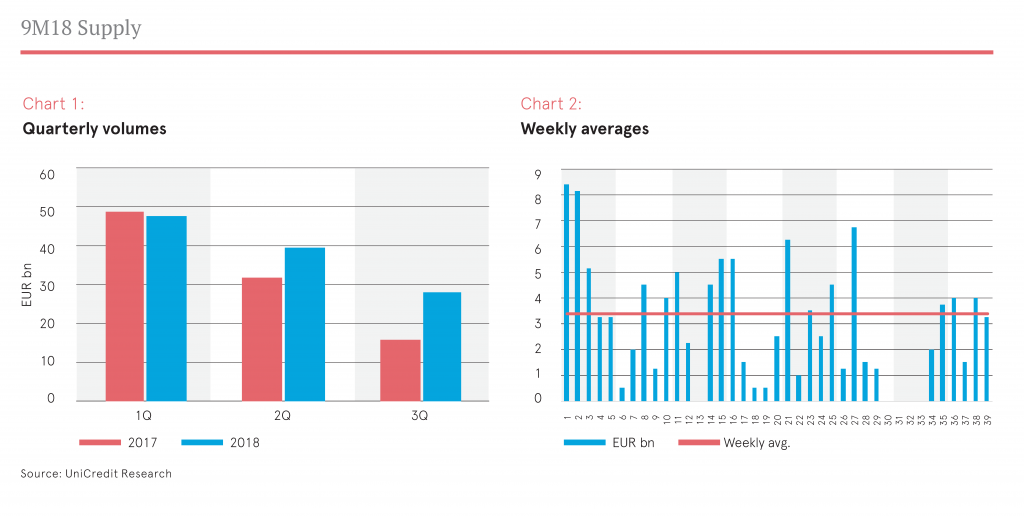 The high volume of issued German Pfandbriefe was driven by a large number of banks having been active in the first nine months of 2018. With a total of 16 banks, Germany had the most active issuer base among all countries (see chart 4). France followed with eleven issuers and Austria with seven banks. 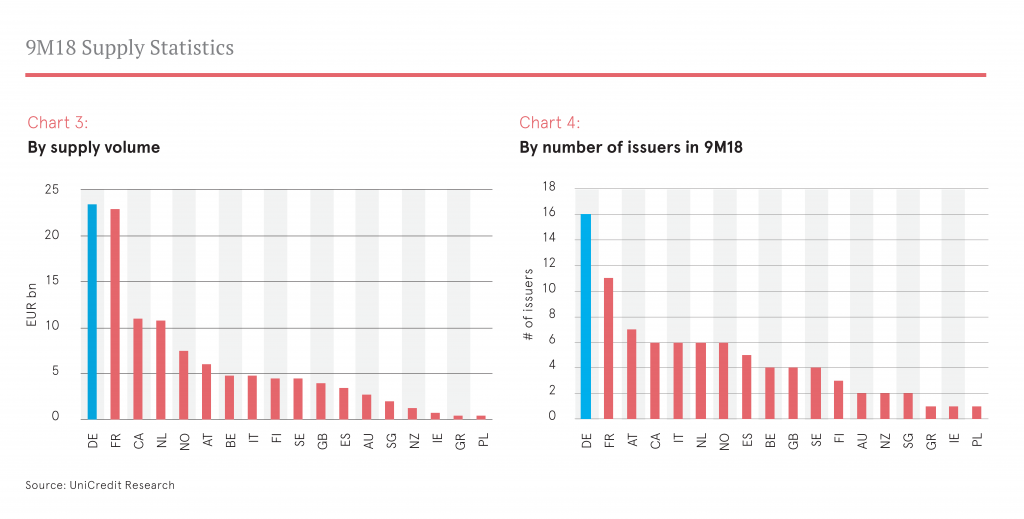 Among the 15 most active single issuers, seven came from Germany and four from France. Commerzbank issued a total of five Pfandbriefe in benchmark format, followed by Credit Agricole, Bayern LB, CAFFIL, CFF and LB Hessen-Thüringen all having issued four benchmark covered bonds in the first nine months.

However, looking at the issued volume, only three of the 20 issuers with the highest volume are from Germany, namely Commerzbank (CMZB) and two German Landesbanks – Landesbank Hessen-Thüringen (HESLAN) and Bayerische Landesbank (BYLAN). The first two spots were taken by French Compagnie de Financement Foncier (CFF) and Credit Agricole Home Loan SFH (ACACB), which issued the highest volume in the covered bond primary market and collected EUR 4.9bn and EUR 4.25bn, respectively. 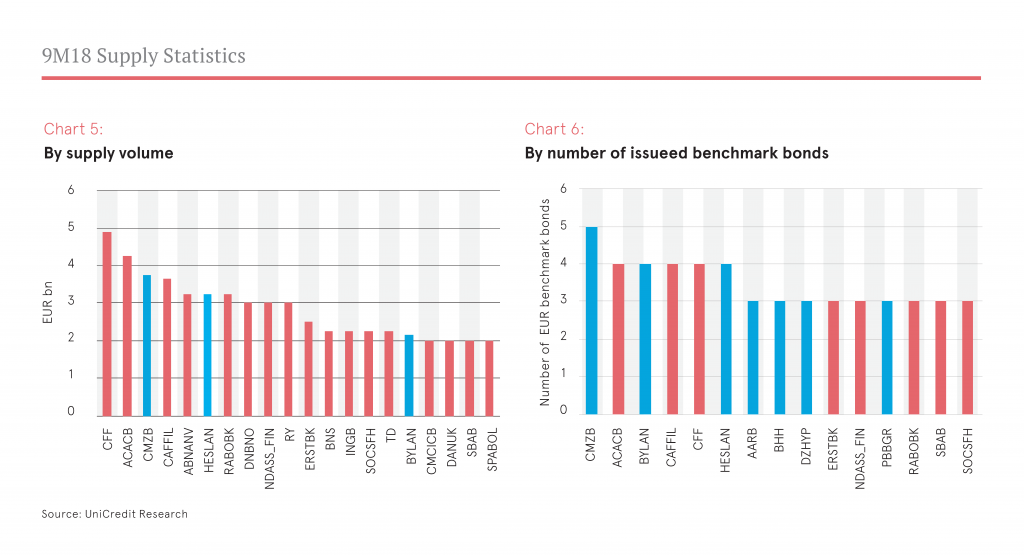 With respect to maturities, the most popular tenor was seven years in the first nine months of 2019, with a share of 28% and a volume of EUR 32.5bn (see chart 7). The other most favored maturity brackets were 5Y (23%) and 10Y (20%). However, besides the typical tenors of 5Y, 7Y and 10Y, banks made relatively strong use of long maturities, issuing up to 20Y in benchmark format. While long maturities are common in private placements or for registered covered bonds (Namenspfandbriefe), the issuance of covered bonds in benchmark format with a maturity of above ten years has been increasingly used in 2017 and 2018 (see charts 8). 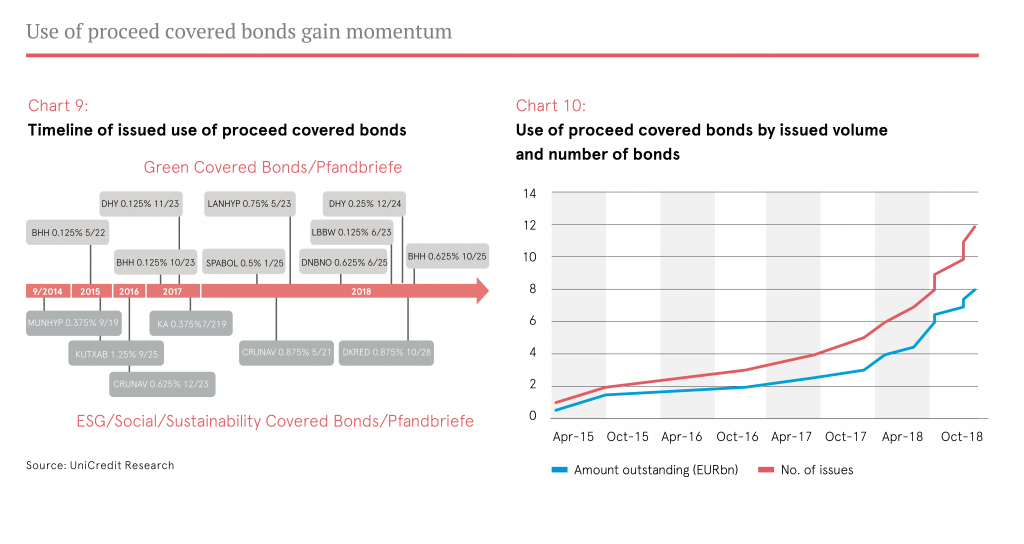 The Covered Bond Purchase Program (CBPP3) as part of the ECB’s Quantitative Easing was a key driver for the covered bond market in 2018. The ECB’s continued buying in secondary markets as well as the participation in the primary market – although at a reduced level – was a stabilizing factor for the spread performance, but also had an impact on liquidity.

At the end of September 2018, the ECBs covered bond holdings under the purchase program CBPP3 amounted to EUR 259.3bn, an increase of EUR 18.6bn during the first nine month of 2018. Monthly covered bond purchases in the first nine months of 2018 declined to around EUR 2.1bn on average, compared to EUR 3.1bn throughout 2017. This development was accompanied by the reduction of the overall monthly purchases under the total APP program, which were reduced from EUR 60bn at the end of 2017 to EUR 30bn as of the beginning of 2018. In June 2018 the ECB announced to reduce monthly purchase volumes further by halving volumes from EUR 30bn to EUR 15bn from October onwards and to terminate the programs at the end of 2018. Besides monthly purchases, the participation of the ECB in covered bond primary market activities was a key element. During the course of 2018, the ECB reduced its share in the primary market from originally around 50% gradually to 10% from October onwards. Although broadly anticipated, the reduction caused some uneasiness in the market and resulted in an issuer having to pull and postpone a deal. An action, that has not been seen for years.

The question is, what will change in January 2019. Although, the ECB has announced to terminate the purchase programs at the end of 2018, redemptions of principal payments (but not the coupons) will be reinvested in the various purchase programs (PSPP, CBPP, CSPP, ABSPP). We assume that reinvestment will remain in the same asset classes and that capital keys will also stay unchanged going forward.

The key difference from January 2019 onwards will be that purchased volumes will not increase any longer, but only redemptions from current holding will be reinvested. In the first nine months 2018, EUR 14.5bn of redemptions were reinvested in addition to new purchases of EUR 18.6bn (equal to the reported net purchases). Thus, the ECB has invested a total of about EUR 33bn in covered bonds this year, or EUR 3.67bn per month on average. Looking at the reported redemptions in the first nine month of 2019, the ECB will have to reinvest EUR 17.8bn or around EUR 2bn per month. Hence, the purchased volumes by the ECB will nearly halve next year compared to this year. However, the end of QE is widely anticipated and reinvestments are still a significant amount, which is large enough to have a stabilizing effect on the covered bond market in 2019. 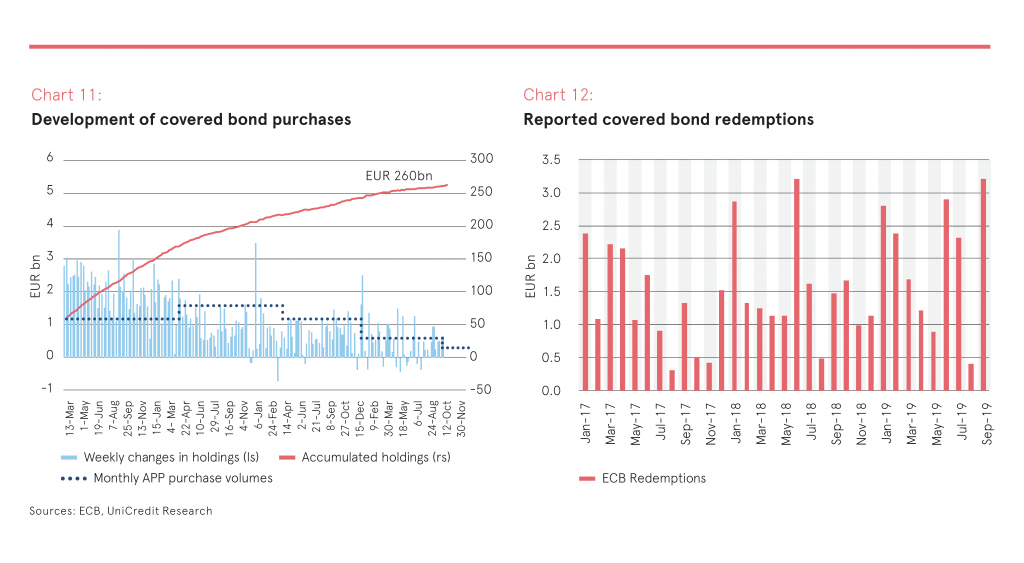 Covered bond spreads had overall a solid performance in 2018. However, the development in the respective three quarters differed significantly. In 1Q18, spreads remained basically unchanged at tight levels, and finished the first quarter on average 3bp wider than at the beginning of the year (iBoxx EUR Covered +2.7bp, iBoxx EUR Germany Covered +2.3bp). This was remarkably stable development given a gross supply volume of almost EUR 47.7bn in the first quarter and a positive net supply of EUR 21.5bn (given maturities of EUR 26.2bn). However, at the end of the first quarter, a slight spread widening occurred, which continued in 2Q18. While the performance of the respective covered bond markets (iBoxx indices) was rather homogenous in 1Q18, market developments started to diverge in summer driven by the political developments in Italy. Consequently, Italian covered bonds traded 37bp wider at the end of the second quarter. This had some spillover effects on other markets, especially Spanish covered bonds (+10bp), and resulted in a modest spread widening of the overall market in the second quarter of +8bp (iBoxx EUR Covered +7.6bp, iBoxx EUR Germany Covered +3.0bp). In the third quarter, the iBoxx EUR Covered remained almost unchanged with just +1.5bp wider on average. However, the range of spread movements across different markets increased. While Spanish covered bonds tightened by 3bp and Portuguese covered bonds by 1bp, Italian covered bonds continued their widening pace and traded 10bp higher at the end of the third quarter. In addition, UK covered bonds closed the third quarter 6bp wider driven by the Brexit topic moving center stage. German Pfandbriefe moved just 1bp wider in 3Q18, bringing the nine months spread development to +6bp and making it one of the most stable markets. 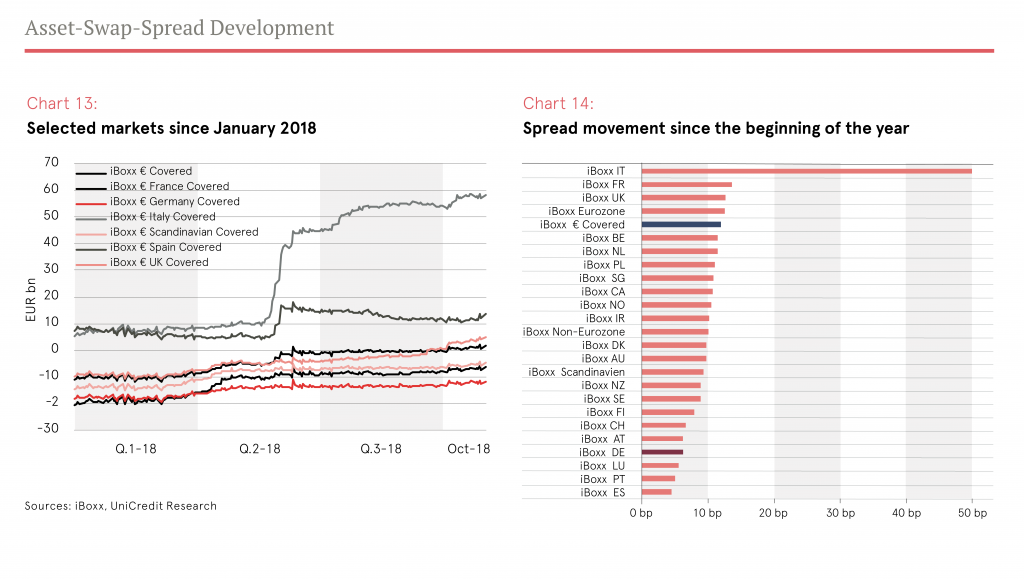