In the past decade, institutional investors were prompted to look elsewhere for opportunities to increase returns against a backdrop of steadily declining yields on investment-grade bond markets. The focus was either on riskier asset classes such as high-yield paper or less liquid private assets such as direct investments in real estate and infrastructure as well as private corporate debt.

In the wake of the 2022 interest rate turnaround, the yield situation in the “classic”, highly-rated bond markets is now more favorable again, which is why a revival in demand for such securities has been observed for some months now. Among other things, insurance companies, pension funds and bank treasuries are re-entering the covered bond markets for the first time since 2019-21, when covered bonds often yielded only negative returns. The possibility of being able to collect significant nominal yields again in a bond segment that has always stood for quality and security is obviously hitting a nerve these days. The fact that the legal framework for the issuance of covered bonds in many EU countries has been put on an even more solid footing in the course of European covered bond harmonization is also helping. In addition, covered bond issuers are also providing substantial supplies of investable bonds this year. Around EUR 140 billion in EUR-denominated benchmark covered bonds have already been brought to market this year – regularly accompanied by good to very good demand. In addition to the opportunity to generate new issue premia, the brisk issuance activity in the primary covered bond market is likely to be very convenient for investors for other reasons as well. For one thing, new issues of quality paper are always welcome these days, as (for quite some time now) a lack of liquidity has generally been an issue across the bond market. On the other hand, in 2022, the issuance volume of investment grade corporate bonds will be significantly lower compared to the previous year, leaving a gap that is likely to be filled, at least in part, by covered bonds.

Relative value – especially against the background of favorable regulatory treatment

Another aspect of the growing investor interest in covered bonds can be seen in the relative value of the various bond segments. Although spread volatility for covered bonds remains at a moderate level, the direction of credit spreads has been clear since early summer. The average spread of EUR benchmark covered bonds calculated by us has risen by around nine basis points since June, which means that it now stands out clearly from the average spread premiums of the rates segments government bonds, sub-sovereigns, supras and agencies. In particular, the now significant spread difference between covered bonds and government securities, which is traditionally used by many investors as a measure of the relative attractiveness of covered paper, now makes the latter once again appear as a noteworthy substitute to government bonds.

But also compared to investment grade corporate bonds, banks’ covered bonds have recently gained ground in terms of “relative attractiveness”. This is especially true when taking into account the preferred regulatory treatment of covered bonds in the investment portfolios of insurance companies and banks. The fact that covered bonds have to be backed by comparatively little equity capital on the part of these investor groups, while at the same time again generating solid returns, makes the securities appear particularly interesting at present in our experience. This can be illustrated, for example, by the following ratio: Return in basis points per percentage point CRR risk weight (in the case of banks) or per percentage point Solvency II spread risk factor (in the case of insurance companies). In this analysis, covered bonds currently lead the yield ranking – unlike at the end of last year.

Investor type – Insurance
Where to find the highest return per percentage point Solvency II spread risk factor?
(as of 6 Sep 22) 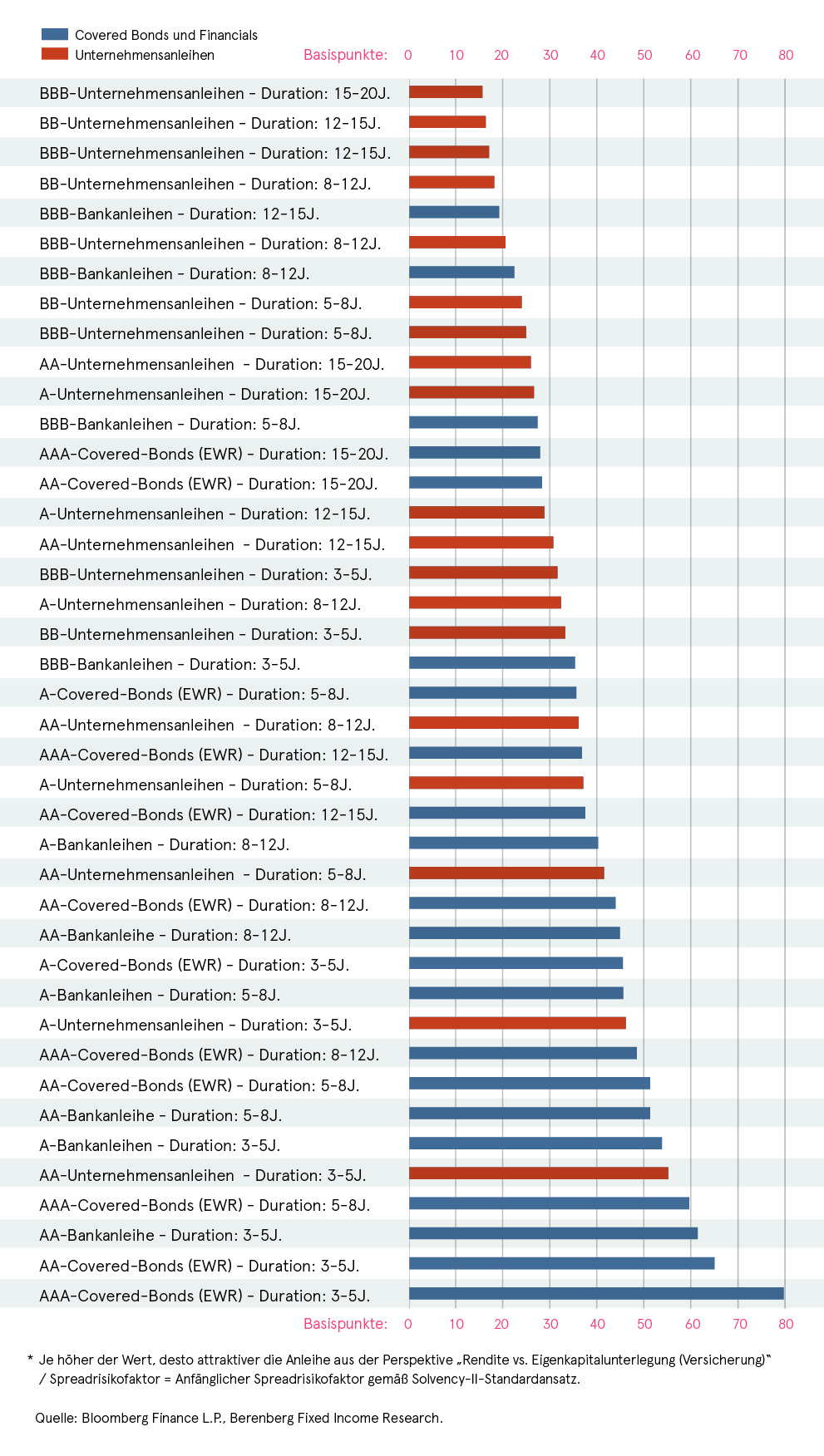 Investor type – Bank
Where to find the highest return per percentage point CRR risk weighting?
(as of 6 Sep 22) 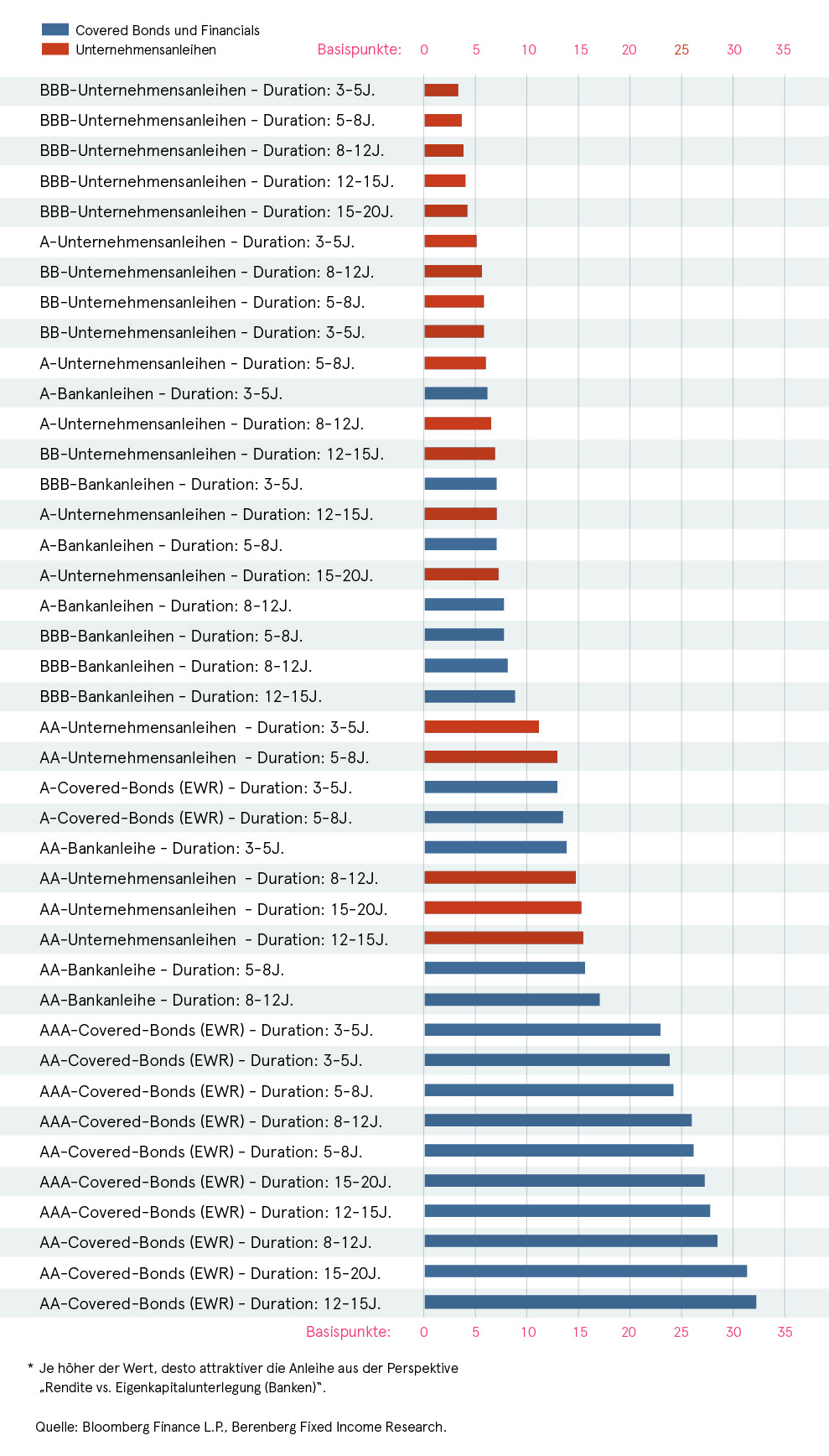 And various examples of this regime change in the bond markets can also be found at the level of individual bonds. For example, until the end of January, a bank treasurer with a Nestlé bond (maturity 2025, AA rating) was able to generate a higher return per percentage point CRR risk weight compared with a largely maturity-matched Pfandbrief issued by Commerzbank (AAA rating) – since then, the situation has reversed and the Pfandbrief is now clearly ahead in this view. For many investors, therefore, the Pfandbrief is once again a real alternative. 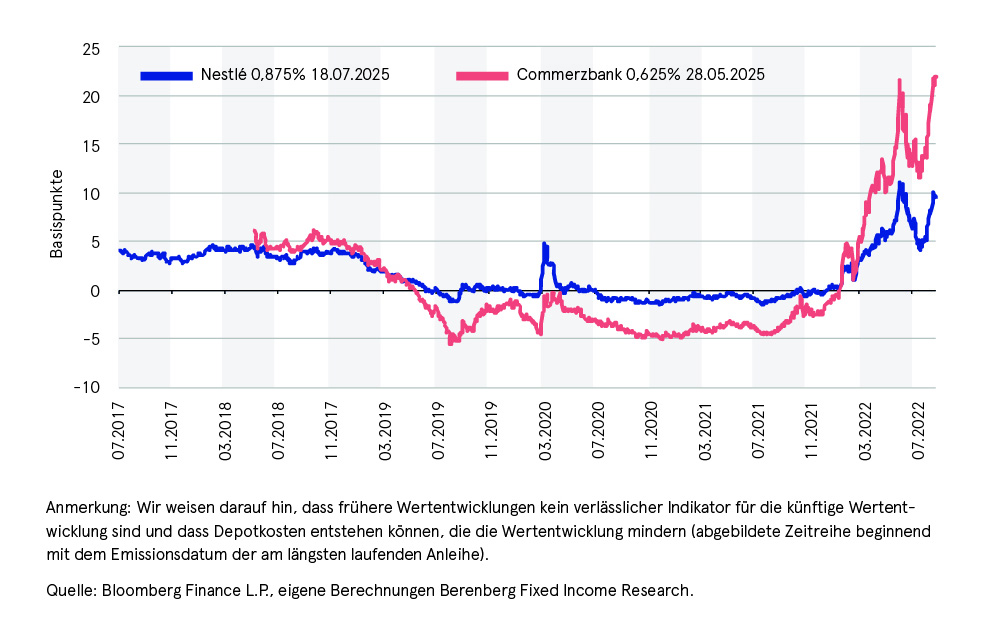