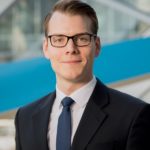 The market has been preoccupied with the various options for designing a covered bond’s repayment structure for some time. While investors focus on the last possible date for repayment of their investment, issuers often focus on the fact that rating agencies view extendable maturity structures positively when rating their bonds. Having usually opted for hard bullet structures in the past, the soft bullet structure has now become the most frequently chosen form for EUR benchmarks. Occasionally, bonds also appear on the market with the conditional pass-through structure (CPT) introduced by NIBC in the Netherlands in 2013.

Hard bullet structures: no option for extending the maturity

Until a few years ago, hard bullet structures were regarded as market practice when it came to structuring the repayment arrangements for a covered bond – or to be more exact – the options for extending an issue if a trigger event occurred (such as an issuer becoming insolvent). This means that if the respective covered bond issuer is not able to comply with his outstanding payment obligations, investors will obtain access to the respective covered bond programme’s cover pool – regardless of the repayment structure chosen – via the trustee or administrator because of the dual recourse mechanism. If redemption of an issue is pending and the liquid funds available are not sufficient to redeem the bond and liquidity cannot be generated by another means, the collateral in the pool will be sold if the bond has a hard bullet structure. This means that investors can expect prompt repayment on the one hand but this is associated on the other hand with the risk that market turbulence means that the market values of the assets may be reduced and, in extreme circumstances, the full repayment amount is not covered by the sales proceeds.

Soft bullet structures and, more rarely, CPT structures as well, exist to counter this risk. If investors’ claims can be serviced when they originally fall due, there are no differences between the three payment structures as far as investors are concerned. Since no uniform trigger events have so far become established on the market to trigger an extension, different variants are currently possible, which lead to the repayment date originally agreed under a soft bullet structure being postponed. Examples of various models within the soft bullet variant include (i) the issuer’s insolvency and postponement of redemption to a later repayment date by an independent trustee or (ii) the postponement of the original repayment date by the issuer. With regard to possible extension periods, a postponement of maturity by twelve months has become established in most cases under soft bullet structures. Interest payments during the extended maturity are largely based on 1-month or 3-month Euribor plus a premium or discount but are also defined as a fixed coupon in some cases. 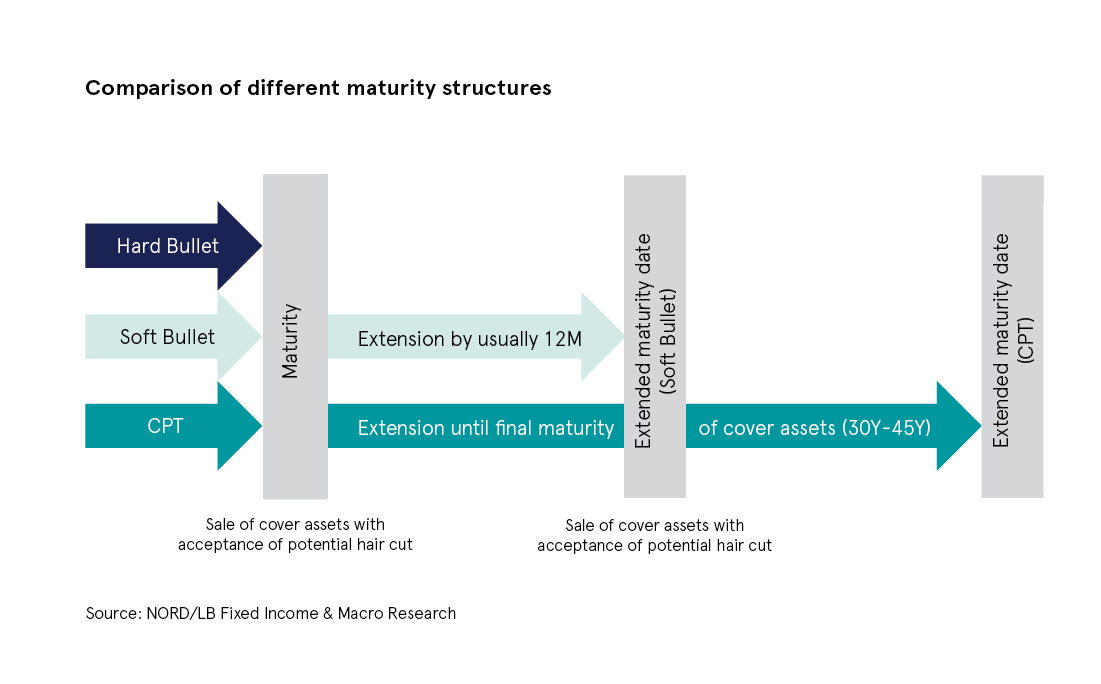 The original repayment date can be postponed for far longer in the case of bonds which feature a CPT structure. This also reduces the refinancing risk to a minimum at the same time. In contrast to the soft bullet structure, once the pass-through structure is triggered (for which, like soft bullet structures, there are currently no uniform trigger events), the outstanding covered bond issues are redeemed firstly from the inflows generated from the assets associated with them and also from the sale of assets, if they can be sold at adequate market prices. However, in contrast to the soft bullet structure, the date at which investors can expect the outstanding claims to be serviced cannot be determined ex ante. Rather, in the worst-case scenario, they can only be determined upon maturity of the assets with the longest term. Rating agencies view soft bullet, and even more so CPT structures because the refinancing risk is lower, as positive factors in assessing their ratings.

Soft bullet and CPT bonds under CBPP3 and for repo transactions

Given that their maturities may, under certain circumstances, be very long, covered bonds with a conditional pass-through structure are subject to special requirements. Accordingly, the ECB currently purchases no covered bonds with this structure under CBPP3. CPT bonds also have a particular feature in the context of repo transactions with the ECB. Adjustments to valuation discounts are relevant for own-use soft bullet and CPT structures. Accordingly, in the course of recognition, it is the extended maturity that is used to determine the discount and not that originally envisaged. In the case of a soft bullet, the maturity would have to be extended by a year as a rule, while all CPT structures fall into the maturity range of “>10 years” when determining any haircut because of their theoretically very long extension period.

Maturity extension also an issue for the harmonisation efforts

Extendable maturity structures are also the subject of discussion as part of the harmonisation of the European covered bond market. The aim is to create opportunities to counter risks resulting from mismatching maturities and potential liquidity shortages. In this context, the proposal envisages in the form of article 17 that it will be left to the respective national supervisory authorities to allow the issue of covered bonds with extendable maturity structures. The event that triggers the extension or postponement of maturity is critical for such structures. This trigger event must be included in the national framework and may not be left to the issuer’s discretion. Bond investors must be provided with detailed information regarding the trigger, the effects on the maturity structure in the event of insolvency and the role of the supervisory authority and the trustee in the course of any extension to maturity.

It is clear from the statements above that the refinancing risk can be significantly reduced compared with a hard bullet structure by means of a soft bullet or conditional pass-through structure. However, investment in such a covered bond requires prior, detailed examination of the terms of the bond in question since there are currently no uniform market standards either for the trigger event or for interest payments during the extension period. With regard to the refinancing risk following the issuer’s insolvency, it must be mentioned that, in the case of hard bullet structures, issuers are already obliged by law in some cases to reduce this risk by maintaining a liquidity buffer. In the wake of the harmonisation efforts, Article 16 also envisages the mandatory introduction of a liquidity buffer to cover the net outflows of liquidity for 180 calendar days for all jurisdictions subject to the Regulation. 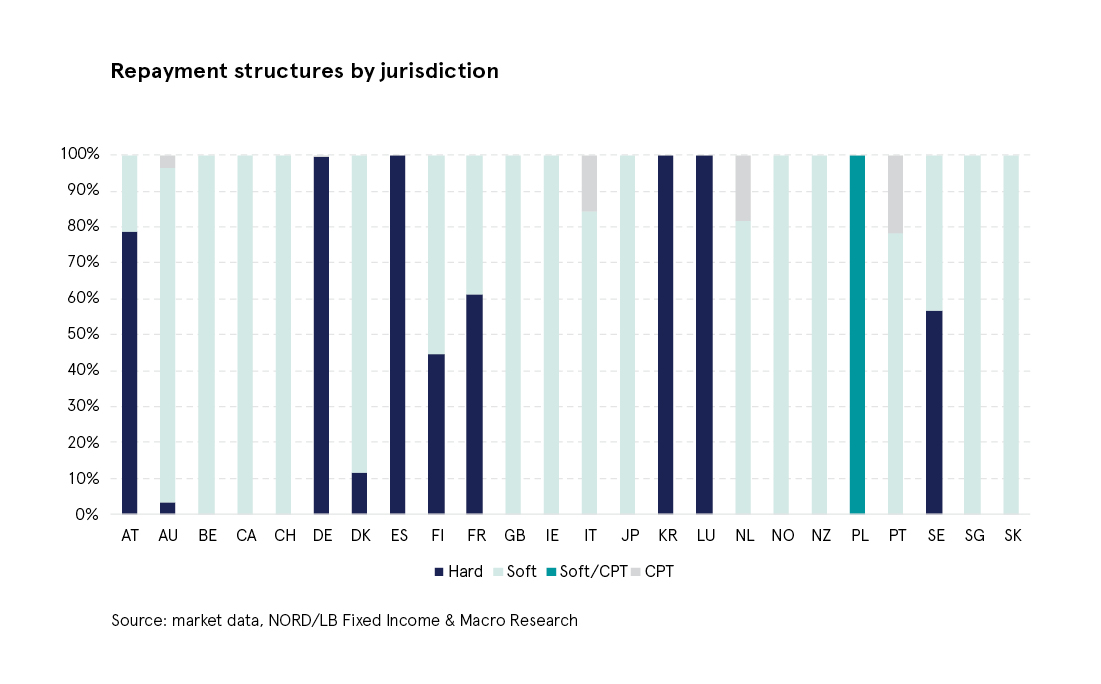 Looking at the distribution of the three repayment structures at jurisdiction level, it is apparent that the only countries to have bonds with nothing but hard bullet structures in the iBoxx are Spain (excl. multi cédulas), South Korea and Luxembourg. On the other hand, there are ten jurisdictions, namely Belgium, Canada, Switzerland, UK, Ireland, Japan, Norway, New Zealand, Singapore and Slovakia, in which only EUR-denominated soft bullet benchmarks were issued. CPT bonds were also issued in Australia, Germany, Italy, the Netherlands and Portugal. There is more than one repayment model in 10 of the 24 jurisdictions represented in the iBoxx. For these jurisdictions, we have assigned the issues placed by the individual issuers to the various extension options below. Polish covered bonds represent a special case and are, accordingly, not considered at this point and below. At the same time, account must be taken of the fact that, under certain circumstances, repayment structures are also used in the respective jurisdictions – and even by issuers represented in the iBoxx – that differ from those of the bonds listed in the iBoxx. However, for reasons of clarity, we focus solely on bonds listed in the iBoxx EUR Covered in our article. 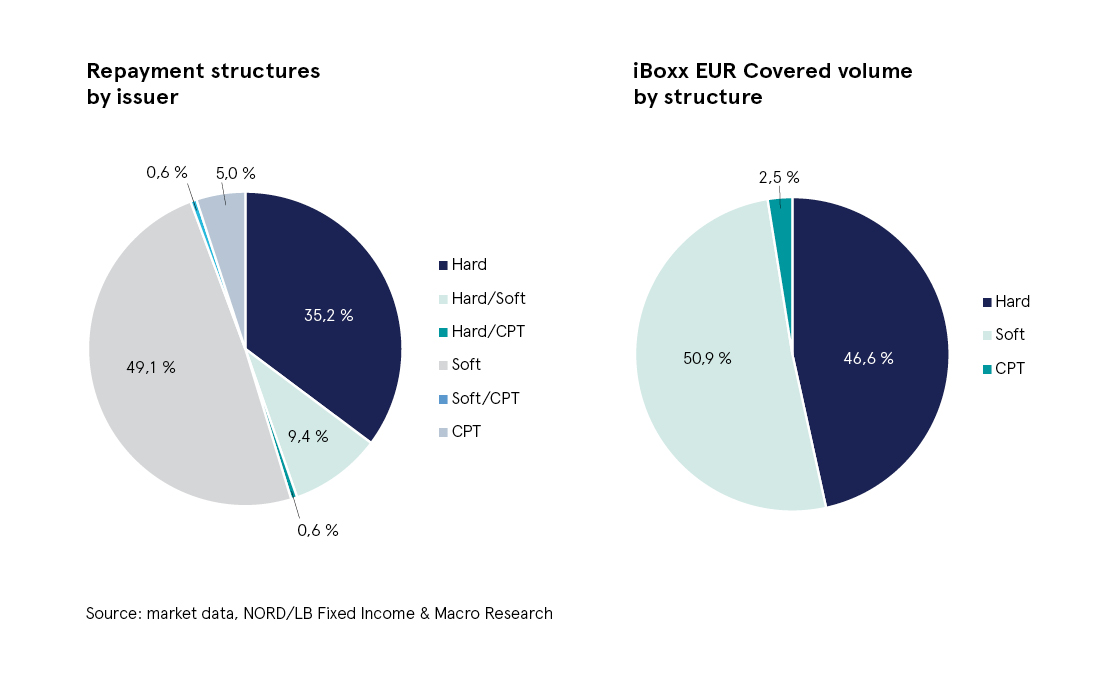 With 78 of 159 issuers (49.1%), those issuers that only have soft bullet bonds outstanding in the iBoxx EUR Covered together comprise the largest share of the index. On the other hand, there are 56 issuers which are currently only represented in the index with bonds that do not offer any options for extending the maturity. The fact that the market for EUR-denominated benchmarks with a CPT structure is still a niche market is illustrated by the share and the number of those issuers that only have CPT bonds in the iBoxx (8 issuers, 5.0%). At the same time, there are 15 issuers in total in the iBoxx which have both hard bullet and soft bullet bonds outstanding and therefore represent a larger share of the index (9.4%). Italy’s UniCredit is the only bank that has outstanding bonds with both soft bullet and CPT structures in the iBoxx EUR Covered. Deutsche Bank, which in addition to its Pfandbrief issues (hard bullet structure) also has an outstanding contractual covered bond with a CPT structure, also constitutes a novelty.

More than half the volume in soft bullet bonds

We used the bonds included as at January 2020 in the iBoxx EUR Covered (excluding Spanish multi cédulas) with a clear repayment structure in order to analyse the distribution of the individual structural forms. It is clear that 46.6% of bonds still feature a hard bullet structure, while the proportion of soft bullet issues together comprises more than half the volume, at 50.9% . CPT bonds accounted for a share of 2.5% .

Looking at the current composition of the iBoxx EUR Covered, it is clear that bonds with soft bullet structures have replaced the previously dominant form of hard bullet issues. This is partly also due to the fact that some issuers have converted issues placed as hard bullet bonds to a structure that offers the option of extending the maturity. Only Spain, Luxembourg and Korea have nothing but EUR benchmarks with hard bullet structures. CPT bonds are still a niche product on the covered bond market, with the Netherlands being the leading jurisdiction for CPT bonds. At the same time, the iBoxx contains more issuers that place both hard and soft bullet bonds than those that only give EUR benchmarks CPT structures. In terms of pricing, there are still no signs of significant differences that can be reliably attributed to the maturity structure chosen.