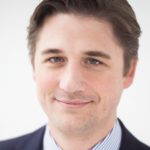 Digitalisation is finding its way into more and more areas of life. At the latest since the outbreak of the coronavirus crisis, the need to work from home and observe social distancing has forced us to abandon old habits and create a new world of work in record time.

This acceleration provides a tailwind for the digitalisation initiatives already under way in the capital market.

Various projects are aimed at digitalising capital market products. The first blockchain promissory notes (Schuldscheine) were launched on the market as far back as 2017. The World Bank placed its first blockchain bond on the Australian market in 2018. And DZ Bank, along with dwpbank, Dekabank and Helaba, joined forces with Finledger to issue a fully digital promissory note in 2019.

Beyond the application of distributed ledger technology, since 2019 the European Central Bank has been seeking to standardise various technical distribution platforms in the Eurozone through the EDDI (European Distribution of Debt Instruments) project, and largely automating the issuance process to that end.

Promissory notes as a guinea-pig

Loan agreements such as promissory notes are suitable for digitalisation because they can be digitally reproduced with straightforward implications under German law. The regulatory requirements for loan arrangers are also considerably lower than in the securities sector.

Blockchain’s distributed ledger is a function designed to facilitate the subscription process and settlement administration. It is not required in order to make a contract. Instead, what matters here is the introduction of a legally binding digital signature.

Experiments have already been carried out with different formats in the area of promissory notes. After initial euphoria about the first blockchain promissory note loans, interest now seems to have abated. Nevertheless, banks are still working hard in the background to press ahead with initiatives such as Finledger.

For DZ Bank, the digitalisation of promissory notes or securities adds value mainly through improved transaction processing. Through its participation in Finledger, the bank aims to use distributed-ledger technology (DLT) to automate the paying agent function.

There is much less potential for efficiency gains in the initial placement and marketing of promissory notes. The goal is to trigger all payments under the promissory note via DLT. The blockchain thus replaces manual administration of the paying agent function in promissory note loans.

Finledger is a project with four equal partners. This reflects the core of DLT or blockchain technology: the partnership network guarantees the integrity of the financial product at all times by simultaneously distributing all details relevant to the transaction in a “smart contract”.

Blockchain or DLT has been compared with bricks. Bricks can be used to build a bridge, a house or a bumpy skateboard ramp. Using blockchain can also serve a wide range of purposes, such as automating securities settlement processes, as mentioned above.

Most front-office processes cannot be automated

This can also, however, be implemented in other ways. For example, it is already possible to make issuance programmes machine-readable and to carry out work processes purely by machine up to the point of registration of the global certificate on an exchange. Combined with the ECB’s TARGET2-Securities system, the entire settlement process based on a digital bond issue could – in the not so distant future – be automated and carried out in real time. This has the advantage that there would be no need for a digital (blockchain) currency, which many central banks still have grave reservations about.

However, this use case also reveals a dilemma: on the one hand, such automated processing would be enormously efficient for the industry if all those involved were to jointly agree on a new standard. On the other hand, central capital market services relating to new issues take place in the front office, where most processes cannot be automated.

They include, for example, the hedging of transactions via the bank’s balance sheet, corresponding derivative-based hedging, and advising issuers and investors. The downstream processes, by contrast, are already largely automated. While some of them are built around existing systems, implementation works well and is comparatively inexpensive due to the high volumes involved.

It is no coincidence that the key players are increasingly to be found in the official sector. After the World Bank launched an initial blockchain transaction in bond format in 2018, the ECB chose a different way to simplify distribution processes using new technologies in the form of EDDI (European Distribution of Debt Instruments).

Various approaches are being discussed to combine front-office with back-office systems in order to offer international investors uniform access to the European SSSA (sovereign, supranational, sub-sovereign, agency) market. To achieve this integration, the legal set-up of a bond as a product must be largely automated. The project is ongoing and has the potential to become an important catalyst for the development of digital processes in the capital market.

Within the Debt Issuance Market Contact Group DIMCG, the ECB evaluates the results of the consultation on EDDI together with national central banks and market participants.

Digitalisation is not an end in itself

The objectives of digitalisation always fall into the same two groups. 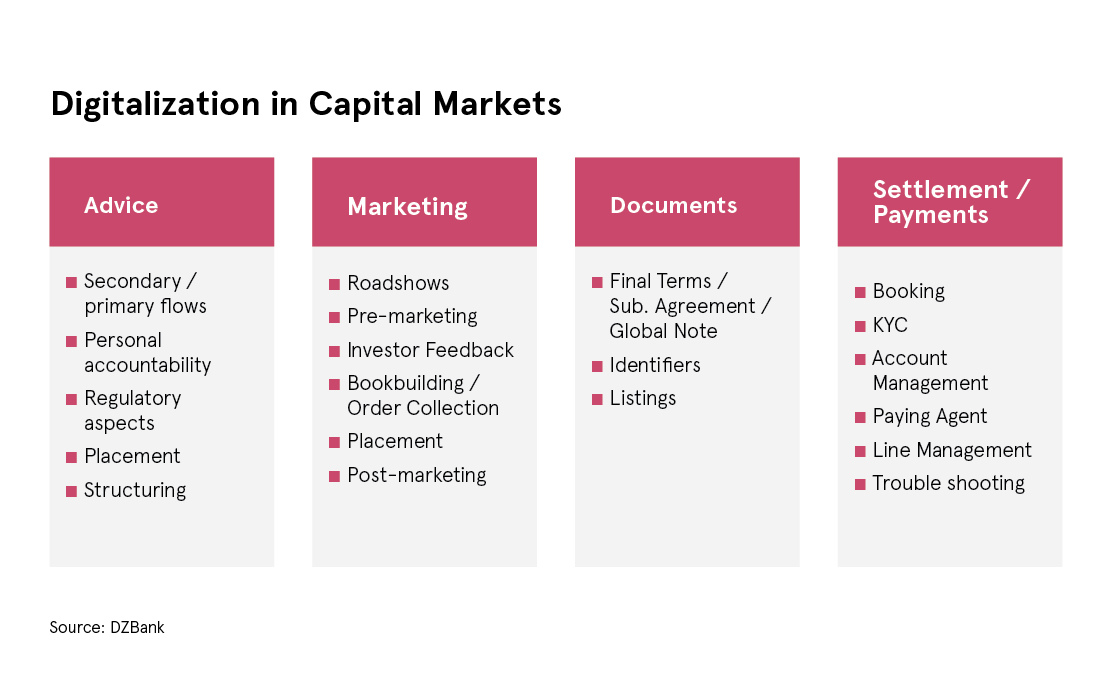 The link between lending business and capital market products

These integrated data collection points make new, creative products, offers and services possible. We could use sustainability criteria from the lending market, which are collected for regulatory purposes, both for the bank’s marketing and to develop our own issuance programmes for sustainability bonds.

This could result in continuously tappable Pfandbriefe which could be accessed by investors on a stock exchange, for example via a marketing platform. The cover pool is automatically linked to issuing activity and accessed via a data lake. The funding options for the Pfandbrief could be directly reflected in the conditions at the branch or in the electronic distribution channel. These ideas are still very tentative, but they mark possible end points of an exciting development.

Middle managers of large corporations who are responsible for individual digitalisation projects are relatively disconnected from overall corporate responsibility. Also, they look after a wide range of products and services. This requires extensive project management with a suitable controlling system and limits agility in project implementation. This applies just as much to large pharmaceutical companies as to big banks.

However, this disadvantage compared to small fintechs is compensated by far greater financial firepower. Partnerships between fintechs and banks are therefore often the right way to turn good ideas into marketable services and bring them to the customer.

Good ideas usually come from a solid understanding not only of one’s own product and processes, but also from a high level of technical knowledge that goes beyond the boundaries of one’s own silo.

In the specific example of a digital bond, it must be possible to combine an understanding of capital market processes and the requirements of issuers and investors with knowledge of the legal aspects of securities issuance and the regulatory requirements for marketing channels. Only then will innovative applications using the potential of data analysis emerge, offering banks new business lines and added value for their customers.

A strong stimulus is helpful here. This can come from taking an impartial look at one’s own back-office processes, or the attractive prospect of a completely new product or marketing success. Anyone who merely tries to “do something with blockchain”, on the other hand, will fail.